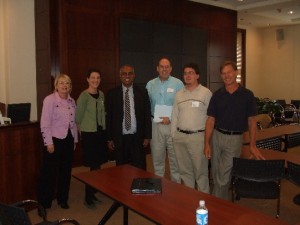 Parking — What a nightmare!

First, my printer only produced about a fourth of the map nicely provided on the Web by the School of Journalism and Mass Communication. The only road clearly showing on my map-segment was Franklin St., which everybody knows about anyways! I had to ask about the rest.

Once we were parked, we stumbled (in the rain, of course) upon Carroll Hall itself — which is a veritable labyrinth of floors and hallways to the uninitiated. Making it necessary to ask our way around the building.

So we arrived to the conference room half an hour late. But just in time, it turns out, to hear all three of the professors give their presentations! (and get free coffee!) — and meet Deb, Tyler, Pat, Kirk, Dick and Rachel Lillis when it was all over.

Deb began his presentation with a slide from News University. The slide showed statistics for how people retain information. According to the figures, people retain only 10% of what they read! Ugh! We retain 20% of what we see, and 30% of what we hear.

Now consider the more active forms of participation. We retain 70% of what we collaborate in, and 80% of the information related to things we do.

Deb showed a slide of an artist’s illustration of cyberspace, which involved some people with 80’s-looking haircuts standing in an urban environs with Japanese and Chinese writing characters on neon signs behind them.

Then Deb talked about JOMC 710, which he teaches and which has a lot to do with computers (of course!).

After this, he praised this year’s JOMC 713 even more, calling it his favorite group of students of all time. He borrowed a phrase from John McCain in the Presidential debate, saying that he admits he “muddles through” 710 (Afghanistan) just to get to 713 (Iraq), which is the true battleground for the War Against Internet Ignorance. (Just kidding on all of this!)

No, but he did say something about deadlines. He said deadlines are important for online classes more than anything, because, quote, “Work expands to fill the time available for its completion.” (Parkinson’s Law) (There ought to be some kind of corollary about sleep doing that as well…) So Deb gives us deadlines, not because he is trying to push us around or something, but, quite the contrary, because he wants us to succeed in the course.

I would like to applaud Deb for the way he ended his speech, “I’m done now.” If only every professor would do that…

Brian used the metaphor of music for most of his talk. He called the textbook “the sheet music,” which gives every student in the class a common reference, from which they can learn to jam together and each student can find his/her own rhythm.

Brian has each of his students write a blog; indeed, his motto for the course is Blogito, ergo sum (Silly-Latin for “I blog, therefore I am.”)

What I enjoyed most from Brian’s talk were the six tips for success in his course:

1.Budget your time. (see Deb and deadlines)
2.Find a rhythm. (Find your own personal groove and niche in the class.)
3.Get in on the discussion early.
4.Find your role or niche. (similar to point 2, but he gave examples of specific class roles)
5.Ask for help.
6.Pass the potatoes. (Think: Classroom as family around the dinner table. Each person has a unique role, and brings their own perspective to the class.)

I just have to say, she has a very pleasant subject to teach!

She showed us an appealing textbook about web design, which she called “internet architecture.”

She put up a slide called “Learning from Las Vegas,” which made the point that we innately have these good ideas about how things should look; we just have to learn the vocabulary for those ideas and apply it. She also made the point that people want design to be useful; in Las Vegas, the signs are conveyors of useful information.

Some of the key principles for internet architecture, she said, are:

This ties in to the whole Las Vegas thing. The signs in Vegas tell you what you need to know, in an attractive, clear, predictable format.

She also talked about the “Gestalt” of a good web page/site; you can visually get a good sense of the whole product from eyeing the page. Then, as you dive into the parts of the page or site, you expand on your knowledge, and each of the parts ties back in to the organic whole.

After the talks, the professors opened up the floor to questions. Mostly, in my flawed memory, it seems like it was this one prospective student asking about the technical requirements of the Certificate Program and whether or not a Certificate student also needed to be an expert in computers.

This prompted Brian to actually show us some of the current posts from his 711 discussion board. He read through a couple of the posts outloud, and tried to show this fellow what Blackboard looks like from the inside.

Brian also used this opportunity to voice his overwhelming preference for Macs over PC’s, which drew a nice laugh from the crowd of 25-or-so people. Deb quickly stepped in and clarified that it is not necessary to own a Mac to participate successfully in the Certificate program!

At which point, we adjourned and I had the chance to meet Tyler, Kirk, Dick, and Pat, and to speak more at length with Deb – oh, and to get a really cool group photo with the whole group of us from 713 (see above)!

I hope these highlights have been at least semi-useful for the out-of-town crowd in this class, which is the majority!